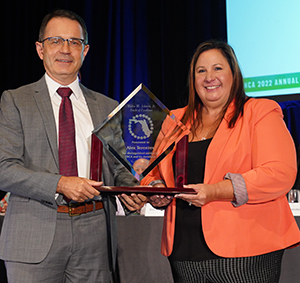 TALLAHASSEE, Fla. – At the Florida Health Care Association’s (FHCA) annual conference in Orlando, Alex Terentev, Chief Operating Officer for The Lilac Health Group and Orchid Cove Health Group, was recognized for his years of service to the FHCA with the Walter M. Johnson, Jr. Circle of Excellence Award.

This award is the highest honor given by FHCA to recognize leadership in the association and dedication to enhancing the long-term care profession. Like the award’s namesake, Terentev served in numerous voluntary leadership positions within the association and has an ongoing commitment to the long-term caregivers in Florida and ensuring that the residents entrusted to them receive the highest quality care.

“Giving back to the profession for the greater good is what Alex is known for,” said Emmett Reed, FHCA Chief Executive Officer. “He has spent years serving the Association in various volunteer roles and was instrumental in championing FHCA’s relief efforts for long term caregivers during Hurricane Michael in 2018. He embodies the true spirit of this award, and I can’t think of anyone more deserving than Alex.”

Terentev emigrated to the United States from Moldova (the former Soviet Union) in 1995 and started his career in nursing home administration in Florida nearly 20 years ago. After running high-quality care centers for several years, he climbed the career ladder to oversee multiple nursing homes operating in the central/east coast region. Today, Terentev serves as Chief Operating Officer for The Lilac Health Group and Orchid Cove Health Group, which operates over 30 skilled nursing centers across Florida.

Terentev is a Past President of FHCA and spent over a decade holding officer positions within the association, including treasurer, secretary, region vice president and district president. He is a graduating member of the FHCA Florida Leaders program and the American Health Care Association/National Center for Assisted Living (AHCA/NCAL) Future Leaders in Long Term Care. Terentev currently serves on the AHCA/NCAL Board of Governors to represent Florida on long term care issues emerging at the national level.

“So many people in my company, my family and my personal life helped me and believed in me, and I’m so thankful for that. This award is a great achievement that I am very proud to receive,” said Terentev.

The 2022 Walter M. Johnson Circle of Excellence Award was established in 1972 in honor of Walter Johnson, Jr. who served as the FHCA President between 1969-1971 and was a significant force in the growth and development of the Florida Health Care Association. The award is part of FHCA’s Long Term Care Achievement Awards which were presented during FHCA’s Annual Conference, July 31 – August 4 at the Hyatt Regency Orlando. These awards annually honor a Nursing Home and Assisted Living Facility Administrator of the Year, a business partner and other individuals for their service and dedication to long term care. For more information about FHCA’s Long Term Care Achievement Awards, visit the FHCA website at http://www.fhca.org/membership/ltcawards.